Image Batch Resizer can be used to resize image files in a batch. It supports to resize hundreds of image files at a time. Image Batch Resizer features: 1.Support all the windows Platformas: such as Windows 2000 and later systems, both 32bit and 64bit systems, XP, Window 7. 2.Resize multiple images with some uniform format in batch. 3.Rename images with random prefix and continuous numbers combination in batch. Such as Pic 1,Pic 2. 4.Support source file formats: BMP, PCX, GIF, PNG, TIF, JPG, ICO, J2K, etc; 5.Support output formats:BMP, PCX, GIF, PNG, TIF, JPG, ICO, J2K, TGA, etc. 6.Image conversion forms:such as bmp to gif, bmp to jpg, bmp to png, bmp to tga, gif to jpg, gif to png, gif to tga, tif to gif, tif to jpg, tif to png,etc. 7.Fix Image:the images will be resized according to the original proportion referring to the smaller value between width and height. 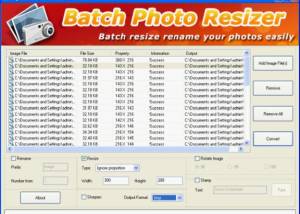 What do you think about Image Batch Resizer?

Photo resizer can resize your photos in a batch with different types—Fix Image, Restrict Width, Restrict Height and Ignore Proportion. Photo Resizer features: 1.Support all the windows Platformas: such as Windows 2000 and later systems, both 32bit and 64bit systems, XP, Window 7. 2.Rotate images with 90 degree, -90 degree, 180 degree in ...

Image Name Editor is a useful tool to edit image files with prefix name and continuous number just like "very0", "very1", "very2" and so on. Image Name Editor features: 1.Support all the windows Platformas: such as Windows 2000 and later systems, ...

... features: 1.Able to convert PPT to AVI 2.Support batch conversion from PPT to AVI. 3.Record the process of ... within a PPT document in AVI. 4.Support video image frame size setting. You can set width and height of the video. 5.Support all windows systems, include: Windows 2000 and later systems, both ...

Get the latest downloads updates and news directly in your inbox. By clicking on "Subscribe" above, you are agreeing to the Terms of Use and the Privacy Policy.
© 2022 TopDownload.Club  |  All rights reserved.
created by FAUST